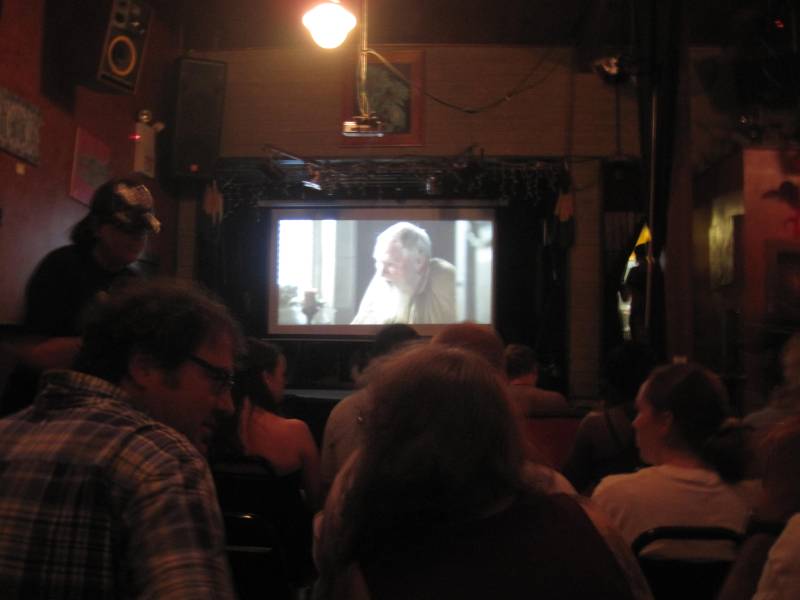 The Hi Ho Lounge. That's Game of Thrones on the screen, the show that airs before Treme. (Davis Logan is on the left)

Just two weeks ago, I was more than a season and a half behind the most current episode of Treme, the HBO series about New Orleans that is shot and filmed in the city. As a hard-working (and unemployed) girl desperate to watch the show at a local bar, I devoted more than 16 hours to catching up.

Decorations at the Hi Ho Lounge.

My investment paid off. I saw last night’s episode at the Hi-Ho Lounge in the Marigny, one of the many bars I’ve heard about but never visited. It’s an unusual place, with the kind of funky atmosphere that feels inauthentic when reproduced by upscale bars.

Before Treme started, I had to sit through a long preview for True Blood, which included Gary Cole, who I audibly noted was “the guy from Office Space.” A man in front of me turned around and haughtily informed me that Gary Cole has a long resume of other films, and rattled off a few.

This unwanted information was delivered by Davis Rogan, the infamous New Orleanian for which the Treme character Davis McAlary (played by Steve Zahn) is based on. Turns out Lil’ Calliope (Altonio “Ace B.” Jackson in real life) and Don Bartholomew (who plays himself on the show, as the record producer) were also in attendance. Unbeknownst to me at the time, the trio had planned to play some of their songs from Treme live after the episode aired. It was written up on NOLA.com, but I had not read anything about the show online for fear of spoilers.

Their performance was great. Ace B and Don B are compelling onstage, and Davis is a better singer than Steve Zahn. Nonetheless, as he micro managed the clearly talented onstage musician , it was easy to see that the “real” Davis is just as obnoxious as his Treme namesake.

For this Kind of New Orleanian, the cringe moment came when Don B. asked the audience if we knew the song Little Liza Jane. No one responded.

“Who here is from New Orleans?” he shouted.

I wished so badly that I could shout “I am!” but I couldn’t. Luckily, no one else could either.  The silence confirmed for me that I wasn’t the only carpet bagger in the room.

The group gave a spirited performance of the song—even better than some You Tube covers. I must learn this song if I am to be a true New Orleanian.

We’ll see what the last few episodes of Treme have in store.

5 thoughts on “Watching Treme in New Orleans (No spoilers)”