Take your bike to City Park and the Burrito Juke Joint

Mulling over your Friday plans? A few weeks back my boyfriend and I spent a full night’s itinerary out in Mid-City and Bayou St. John. I’m passing it along in hopes you’ll enjoy it as much as we did.

City Park and Lake Pontchartrain
I had never been past the part of City Park that I-10 bisects. We started out on the bike path near the entrance of the park which led us beyond the highway, past Pan-American stadium. Turns out there’s a bike path on the east side of City Park that takes you all the up the Park to the lake. It was a great ride– the path is smooth, yet curvy, so it doesn’t feel boring. Many of the houses along the water had docks and boats, which reminded me of Miami. I have not spent much time in that part of the city and am not sure what it’s called. Google Maps says”St. Bernard area” and “Fillmore.” More Googling leads me to believe that area is part of the greater Gentilly neighborhood. Thoughts?

The ride was so leisurely we realized we could easily make it to Lake Pontchatrain. After we passed City Park, we rode by Lake Shore/Lake Vista, which is part of the land reclaimed from the lake by the Works Progress Administration in the 1930s. The houses there are so new that it felt like we had biked to another city (although some houses were built to look old, with huge windows and balconies). The houses in this area are arranged in the “superblock” style, which means houses are set back from the road and there is more communal green space. Indeed, grand boulevards of green separated the houses. It was downright adorable. I bet it costs a lot of money to live there.

We rode by the lake and down the eastern edge of City Park, weaving our way around soccer/football/tennis game traffic. It was quite the ride and our behinds were sore. Perfect time for burritos! 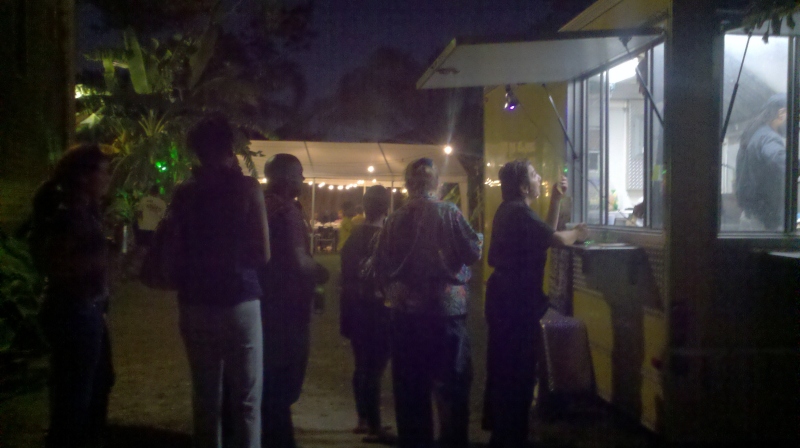 My boyfriend read about the Burrito Juke Joint in the Gambit. Local chefs Aiji Daste and Juba Kali set up their burrito truck in the yard of a house on Dupre Street, near Esplanade Ave. The menu and entertainment at this pop-up party varies, but the week we went there was a brass band. The food was so good! The only disappointment was that they ran out of the sweet potato cake before we could try it.

The best thing about the whole event was how family friendly it was. There were kids horsing around while their parents looked on and chatted with each other. It made me feel like part of a community.

As always, I was unprepared and didn’t have bug spray or beer (must bring next time!)

Pals
I have yet to visit all of the bars in Mid City, and it turns out that Pals is nearby the Juke Joint. Pals had that dirty bar vibe and makes excellent mixed drinks. The bartender was really nice. We didn’t stay too long because OH WE BIKED 11 MILES. But we’ll go back some day.

Hope you make this your Friday! (Unless you’re celebrating Yom Kippur, in which case I would not recommend this evening.)