The Krewe of Muses M Flags 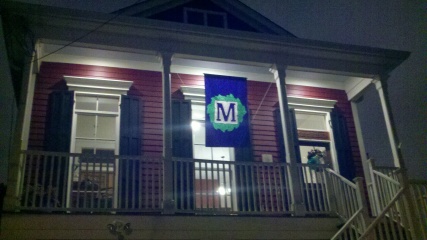 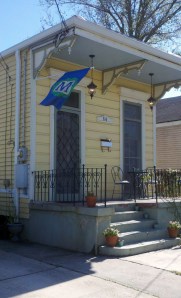 You may have seen this flag, which represents the Krewe of Muses. My New Orleanian was a little rusty when Carnival season began and for a moment I wondered if the M stood for Mardi Gras.

There are so many M flags flying–I’ve seen about six on neighboring streets–but wiki says Muses has 2,000 members. Are all of these flag fliers members of the Krewe? Or are they simply fans of the parade? I don’t think I’d feel comfortable flying a Muses flag unless I was involved– but that’s just me. What is the customary around here?

UPDATE, 2/2/12: The M flag represents the home of a Muse. However, as you’ll see in the comments of this post, not all Krewe members actually participate in the parade.

What is a Krewe?
A Krewe is an organization that puts on a Mardi Gras parade, walks in a parade and/or organizes a ball. Some of the groups do all three and some just hold a ball.

How do you join a Krewe?
Some are invite only. Some krewes allow you to join if you just pay the dues. The dues cover parade costs, float-building costs, and the costs of throws. Apparently, Muses is not accepting new members.

What is Muses?
Muses is an all-female Krewe that started in 2001. Their parade is always the Thursday before Mardi Gras Day. Muses is known for their signature throw– an elaborately hand-decorated high heeled shoes, often covered in glitter.

Here is a blog post where a Muses rider answers  more questions about the krewe.

What is a throw?
A “throw” is a slang for the trinkets thrown to the crowds during during Mardi  Gras parade. I believe the only krewe that does not actually throw their hand outs is Zulu, because they hand out coconuts and some dumb dumb got hit in the head with a coconut and sued.

2 thoughts on “The Krewe of Muses M Flags”