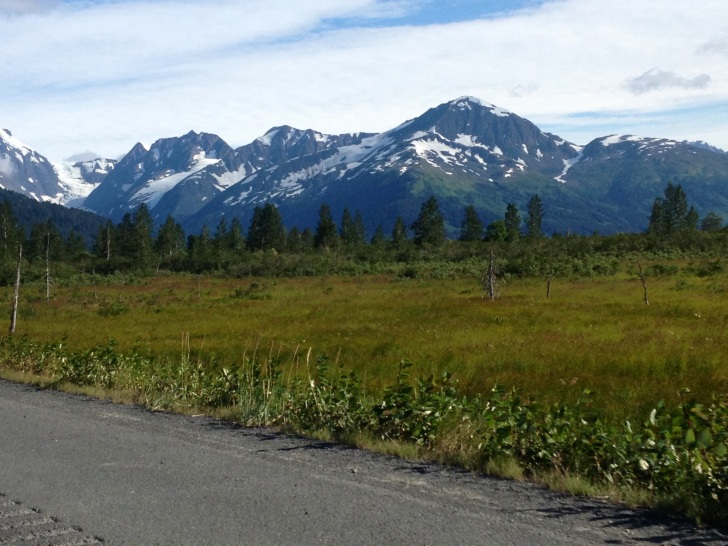 Adam thought life in Alaska would be living in a tundra. Here’s a picture I took driving through the Kenai peninsula.

My brother moved to Anchorage, Alaska over 2 years ago to take a job as a TV reporter for KTUU. Adam has lived all over the country, but Alaska was still a culture shock from him– after all, my family is from Miami! Last year, I had the opportunity to visit him there and we sat down for a Kind of New Orleanian interview. We talked about state pride, losing daylight, and the correct way to describe someone from Alaska.

What did you think Alaska would be like before you got here?
I thought it would be a frozen tundra, not as green as it is. I was surprised at how Anchorage is very similar to a lot of other Lower 48 cities.

What are the stereotypes of people in Alaska?
People imagine Alaskans are like hermits. Anti government or anti social. Someone told me when I first got here was that people come to Alaska for two reasons: they’re trying to improve themselves or they’re escaping something.

Have you found that to be true?
I don’t think a lot of people are here because they’re escaping. They’re here for opportunity or they just love the outdoors.

What percentage of people have you met are from here?
Very few. Maybe 20 to 30 percent. I think that’s because this is a very young state.

Did living here get you more into nature?
Absolutely. I’ve learned to appreciate animals much more. I don’t think you can live here without at least opening yourself up to nature. 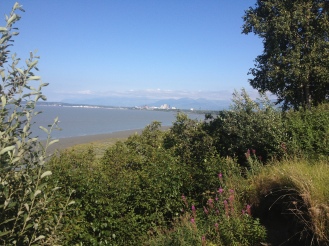 A view of Anchorage from the airport. Adam says most people who live in Alaska move to Anchorage, the largest city in the state.

In a lot of other states kids leave the rural cities to go to the “big city.” Is that accurate for Alaska?
Yes. There are a lot of people here that come here from villages and other small towns. If you’re going to stay in Alaska, Anchorage is the place to be (unless you have a family run business or a reason to be in another city.)

What kind of jobs do people have in the smaller cities?
It depends. In some of the villages, it’s fishing or mining. Or maybe you own a small business. Other people work for the city’s government or something with the natural resources.

How would you describe people from Alaska?
People here are pretty genuine. They’re very open and honest with you. They’re definitely a very tested people. They’ve been through a lot and they’re tough.

It’s interesting that you said genuine to describe Alaskans. Why does that stick out to you?
People seem to be less fake in Alaska. Like in South Florida, people have this fake persona. In Alaska, you may find somebody who drives a beat up truck, with a fishing rod hanging outside, wearing camouflage… and he’s like “It’s who I am. I’m proud of it. But I’m going to be nice to you if you’re nice to me.”

People here have varied interests. A guy that looks like a professional, works in the BP building and wears a suit and tie Monday through Friday could be out on the weekend shooting moose in the middle of nowhere.

So what do they call them… Natives?
Actually, somebody taught me that you call people that are Eskimos—I hate using that word but I’m just using it for description sake—you call them Alaska Natives. You call someone who is not of native descent but was born here Native Alaskan. You do that to distinguish between what’s considered an actual Native American person and it’s sort of more like a formality thing, as a respect thing.

And then Eskimo is just one of the tribes, I’m assuming?
To say an Eskimo would be a really blanket statement. There’s different tribes here. And actually, I learned the people that build actual igloos are mostly Canadian Eskimos. They’re not really even in Alaska. People do build houses under the ground (from what I’ve heard) in some of the villages in the arctic, but they’re made out of bits of trees, skins of animals. Whatever they can forage out of nature.

So the Eskimo… are they a tribe?
No, that’s just a description of them. They’re more like a … um, there’s different ones. A Nupiak, Athobascan, Klincket… there’s a few more. I should know, but I don’t. It’d be like saying, “Christian.” Baptists, Methodists, Southern Baptists. They’re different descriptions. It’s not inaccurate to say someone’s Christian if they are but they may be Methodist.

But you wouldn’t call a Native American from Oklahoma an Eskimo? It’s more a description for Northern people? Is it common to meet Alaska Natives?
Very much so. Obviously more so out of Anchorage, but you can find a lot of them here. 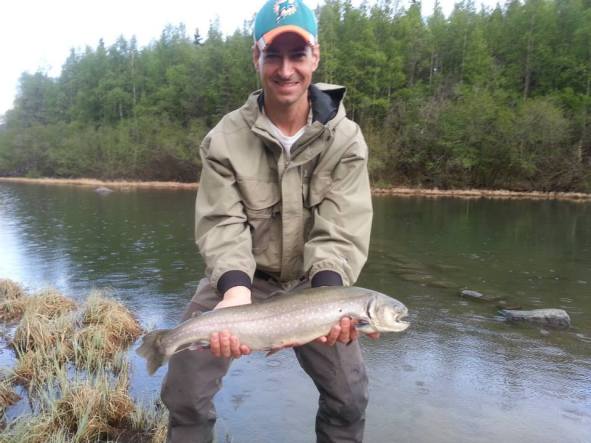 Life in Alaska gets you more into nature, says my brother.

I’ve split this interview into two parts. Click here to read part 2, with Adam’s thoughts on the long hours of darkness in Alaska and his number one recommendation in the state.