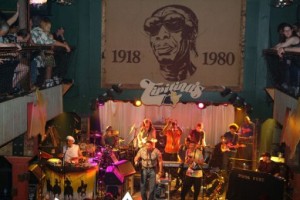 The Professor Longhair painting above stage at Tipitina’s. Comedian Pete Holmes made jokes about him at a 2013 New Orleans set. (Photo from wwoz.com)

During comedian Pete Holmes’ 2013 set at Tipitina’s, he turned around and noticed the mural of Professor Longhair that overlooks the stage. Exaggerating a startled reaction he asked the audience “Is that a ghost? Is this place haunted?” I could feel people’s lips purse. Professor Longhair is one of the most famous R&B musician in local music history, and is credited by many as the forefather of the modern New Orleans jazz sound. Tipitina’s is a music venue named for one of his most famous songs. New Orleanians were not going to laugh at Holmes’ joke.

Comedians often try to relate to crowds by riffing about their audience or the theater or the city they’re in. However, I’ve noticed that when touring comedians perform jokes that seems universal, fit for any city in the U.S., they don’t get laughs here. Context is everything in New Orleans. Maybe Holmes knew Professor Longhair’s relation to the club and thought we’d get a kick out of his reaction. What he may not have understood is that New Orleanians are so protective of the city’s culture that people here are rarely open to an outsider’s observation. However, it’s the touring comedians  who have shown they understand the city’s singular way of life that have struck a chord with audiences here.

In his stand up, comedian Moshe Kasher pushes the comfort levels of his audiences. I discovered him in 2011, when The New Movement theater brought him here as part of Hell Yes Fest. During an improvised conversation with an audience member he made a very broad Katrina joke. The crowd went silent. I can’t remember the joke, but I do remember thinking that he might not know that the after effects of Katrina still haunt a lot of people. Kasher tends to exploit these moments, and went further into the joke. The audience was not on his side. I’ve seen Kasher perform in New Orleans several times since then, and it’s clear his time here has allowed him to hone in on details that would make any local laugh. A more recent joke he did about the ridiculous layout of shotgun houses got a huge response from the room. I think this gave him buy in to make more edgy jokes about the city, since the audience felt like he was doing it from a more loving place.

Hannibal Buress is a nationally known, touring comedian that can extract specific absurdities in New Orleans life and transform them into something palpable for both local and national audiences. He’s performed here with increased regularity over the past few years, headlining his own shows and popping up at local New Orleans comedy nights. (In fact, he’s performing 2 shows at tonight Civic theater!) Clearly, Burress’ time in the city has made him comfortable to comment on our culture to a national audience. Earlier this year, he performed a set on Jimmy Fallon entirely dedicated to his observations of NOLA.

He does a great job making the eccentricities of the city relevant to the rest of the country. What I think makes his humor “acceptable” to a local audience is that his affection for New Orleans is apparent. He accepts that its the city’s absurdities that can make it so loveable. And isn’t that what we all do?

Just like anyone else new to the city, comedians needs time to work out their feelings about New Orleans. Enough time to perfect a thought that resonates with people here. However, the comedians who have proven through their humor that they understand our culture have found acceptance and appreciation from audiences both local and national.

Are there any other national comedians who have NOLA-centric material that you like? Louie CK had some great material when he performed here. What do you think?