A Visit to Mardi Gras World

My best friend was in town this past week and because torrential rains thwarted her plan to get a sunburn that would eventually settle into a tan, I suggested we visit Mardi Gras World. Previous I considered MGW a tacky trap, but watching the parades this year left me eager for a behind the scenes look. My friend has never been to Mardi Gras and has always painted and sculpted, so I hoped that the museum would give her a taste of the revelry and artistry of Carnival. 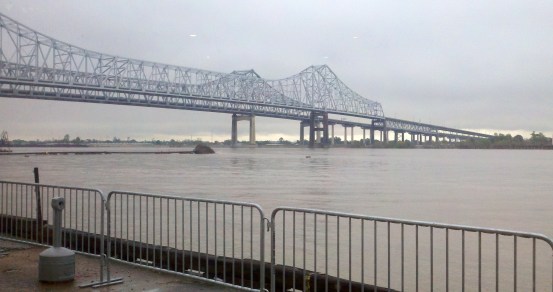 The tour begins with a 15-minute video that was a decent Mardi Gras crash course and it dispelled the myths that Mardi Gras is a one-day parade and that it’s a boob fest. After the video came my favorite tour touches: our guide treated us to a piece of Gambino’s king cake and invited us to sample CC’s coffee. (Bigger pieces next time, please! Some of us are piggies.)

Theme Submission
MGW builds floats for 40 out of the 52 krewes that parade during Mari Gras.  According to our tour guide, the float structures start around $50,000 and having a float built starts at $10,000. Krewes generally submit their themes for the following the day after Mardi Gras, which surprised me. I knew it had to be ahead of time, and I guess it’s just about sending an email, but I can’t imagine already thinking about next year’s parade when you’re sobering up on Ash Wednesday. 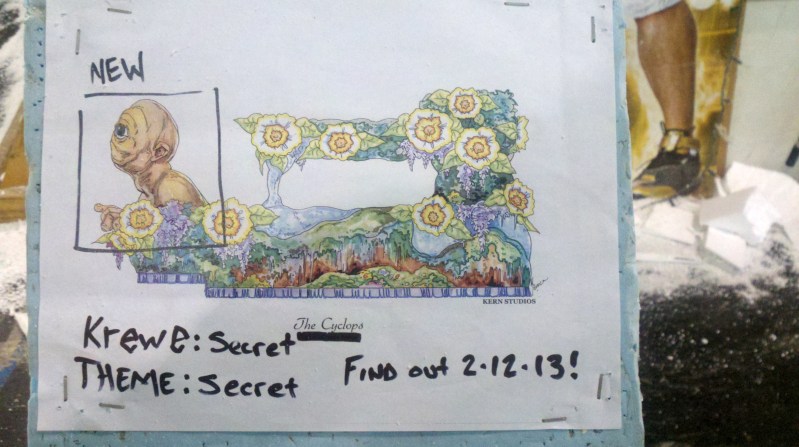 Following theme submissions, MGW artists work with the krewes to create a sketch of the floats in their parade. As we walked past the work stations we could see the pictures of the floats, but the names of the krewe and themes were redacted. The Tchoupitoulas-adjacent site largely houses Bacchus and Orpheus floats, so all the Nancy Drews and Encyclopedia Browns out there already have some clues for their sleuthing. 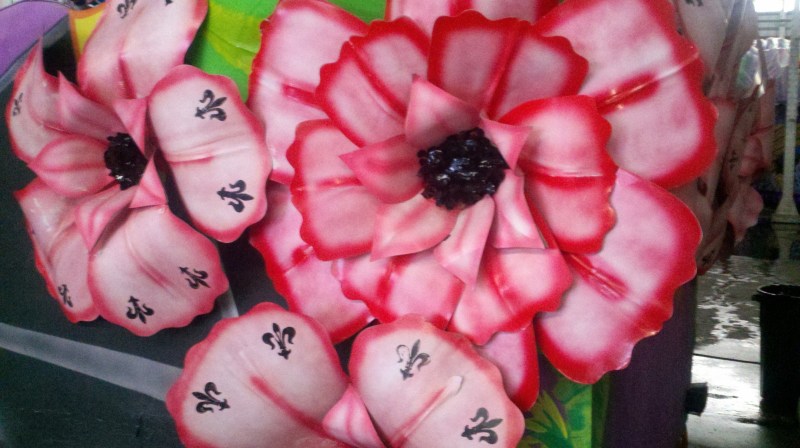 Orpheus flowers made of cardboard and wire

Our tour guide referred to all the objects on the floats as “props.” MGW makes said props from fiberglass or styrofoam and paper mache. The styrofoam props are cheaper and easier to repurpose. Our tour guide showed us a Marilyn Monroe that once was a baseball player. “Look at how her hands hold up her skirt. That used to be a baseball player gripping a bat,” he explained. My best friend commented on the size of Marilyn’s arms. There’s a Mardi Gras World location on the West Bank that handles the construction of the fiberglass accessories. There were some fiberglass props around the facility and our tour guide hinted that you could tell a prop was made from fiberglass because it was affixed to a metal stand. (Or you could tap it and feel it was really hard.) 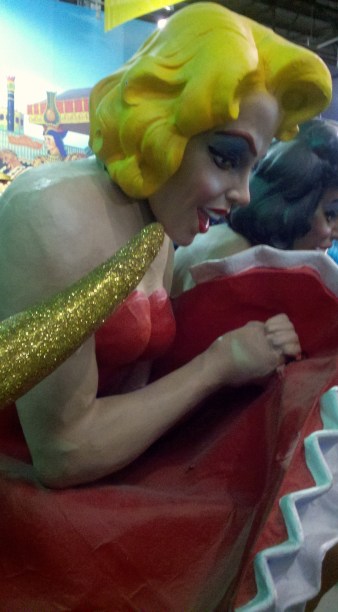 To form the shape of the props, MGW artists cut slices of styrofoam and assemble them like a sandwich. These assemblages are then paper mached, painted white and then painted to resemble anything from a bee to Tina Turner. 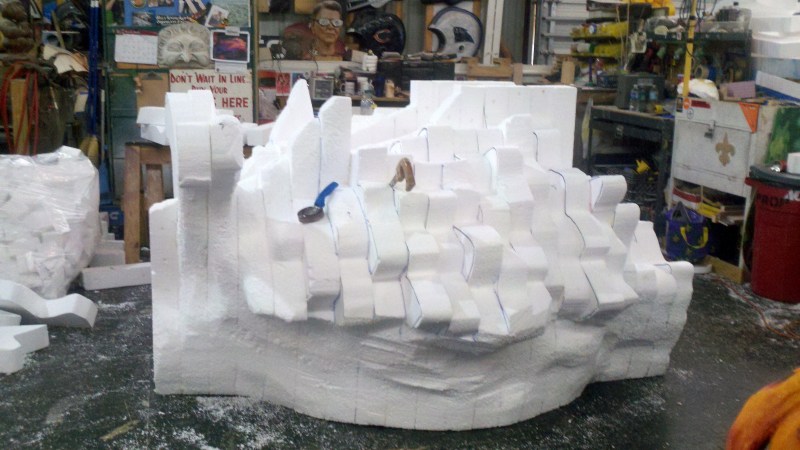 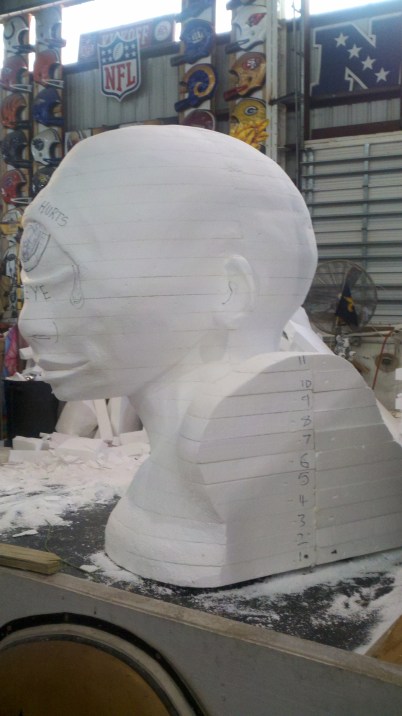 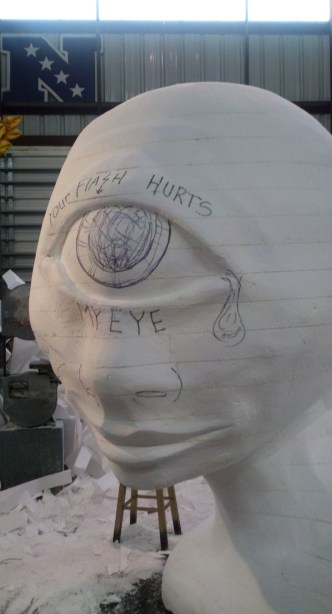 Bathrooms
Something I didn’t realize is that the floats are equipped with bathrooms– port a potties tucked away inside the float. “Of course!” I thought. Riders need to go to the bathroom! However, when I relayed this to my boyfriend he said mentioned that he had Krewe members get off the float and use the bathroom. The tour guide also showed us a seat belt contraption that riders can hook into so they don’t fall off the float. I’m not sure how effective it is– can anyone comment? 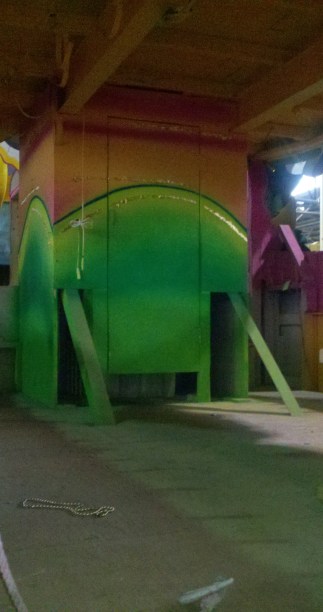 Squint and you'll see the port a potty. 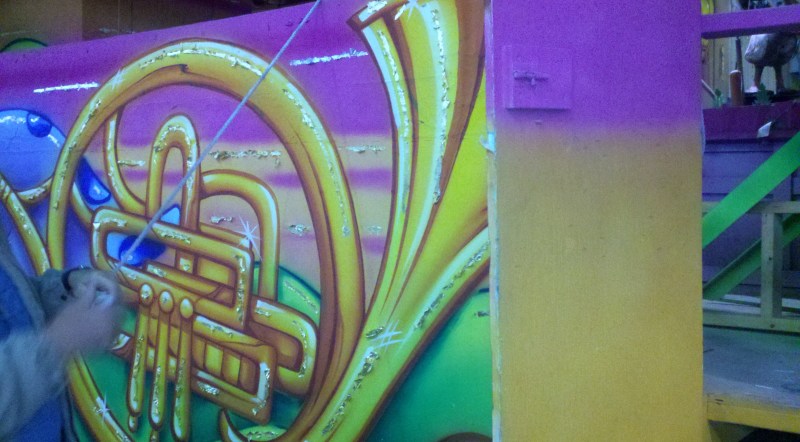 The Chick Fil A Cows
Mardi Gras World gets about 20 percent of their business from creating props for other parades and businesses– LIKE CHICK FIL A. THEY MAKE THE COWS FOR CHICK FIL A. 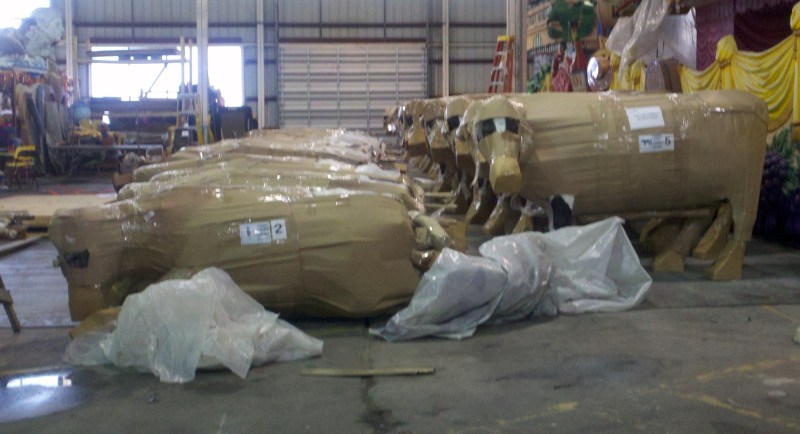 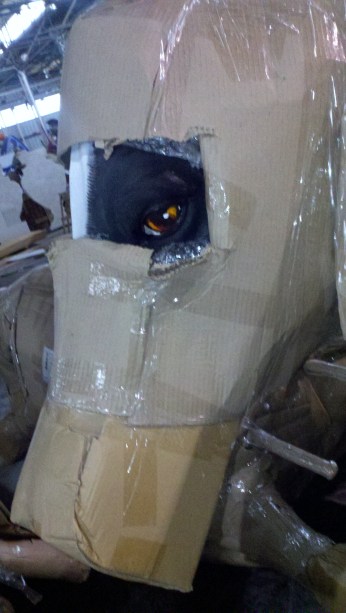 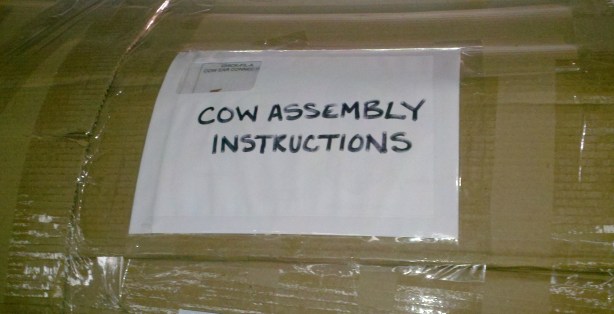 I LOVE CHICK FIL A.

Verdict: Add it to your itinerary for visitors

It was a really delightful and interesting trip– one of those really touristy places you wouldn’t visit unless you had a friend in town. The price is a bit above my pay grade– $19 for an adults– so maybe next time I’ll ask for a bigger piece of king cake.